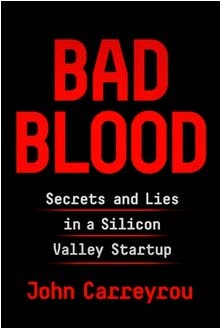 I’d heard about this book – the story of the rise and fall of Elizabeth Holmes and her company Theranos – long ago, but I only decided to read it when preparing readings for my course, The World of Entrepreneurs. I wanted to understand her case, as an example of the dark side of Silicon Valley – not the side of “fake it until you make it” – but the side of “lie to everyone, about everything, if that gives you an advantage.”

Aside: I worked in three start-ups in Silicon Valley, of which two were dominated by frauds of the “funding secured” and “vaporware” models, respectively, so I have a real interest in similar stories. That said, I am pretty sure that at least 80% of start-ups are, on the whole, legitimate (read this review). The trouble is not the really bad apples – Theranos and WeWork being recent examples – but those that cut corners as a “necessary part of doing business” – Facebook (NASDAQ:FB) and Uber (NYSE:UBER) being high on that list.

This review will be short because Carreyrou is such a good writer and the story comes at a fast pace. What strikes me are the following:

My one-handed conclusion: Read this book if you want a fast-paced story of how self-delusion, greed and privilege (high-priced lawyers who will defend your lies) can allow someone to get away with “statistical murder” (all those wrong tests surely resulted in more than one death). FIVE STARS.

Editor’s Note: The summary bullets for this article were chosen by Seeking Alpha editors.