Restaurants have seen an incredible comeback from the depths of the panic-induced selling that occurred earlier this year. As a group, restaurants have recovered nicely, but individual stories have varied immensely. The biggest winners have been restaurants with models that transitioned easily to takeaway and delivery rather than in-person service, which are influenced by a variety of factors specific to each chain’s offerings. One chain that I think may have priced in a bit more of a recovery than is prudent at this point is Dine Brands Global (DIN). 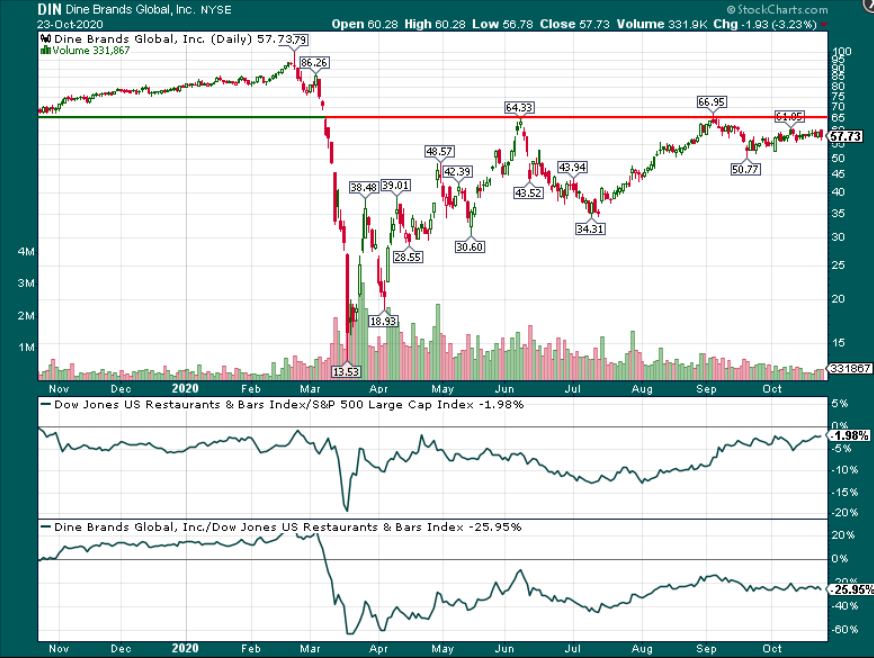 The stock has quadrupled from its March low at just $13, trading today near $58. You can see in the middle panel that the restaurants have made up the entirety of the underperformance that initially ensued following the outbreak of the virus, trading higher against the S&P 500 in recent months to close the gap.

Dine has roughly kept pace with its peer group in the past couple of months, but overall, remains very weak in 2020. The underperformance is even worse if we look at pre-COVID-19 levels, as Dine has been left in the dust by its peers. There’s good reason for that, which I’ll discuss below. This also means I think Dine is fully valued here.

The decline in Dine’s revenue for this is, of course, predictable. The company’s franchisees were forced to close stores for varying amounts of time earlier this year, depending upon geography, and even today, some localities remain under semi-lockdown conditions. This is bad news for restaurants, and Dine is suffering for it.

Revenue this year is expected to plummet from $910 million to $679 million year-over-year, a massive decline by any measure. Next year is where it gets interesting, however, as analysts see a jump back over $800 million. Keep in mind that is nowhere near what Dine produced only last year, so it would seem the recovery is perhaps a long way off. That makes perfect sense to me in the case of Dine; more on that in just a bit.

What’s interesting about the move in revenue next year is that analysts have Dine producing a 39% gain in comparable sales in 2021. That would retrace the 32% decline that is supposed to happen for 2020, so it isn’t like Dine is seeing a massive surge in new business. Still, building in this level of recovery seems awfully risky to me given Dine’s position before the crisis, as well as its competitive positioning.

The company’s comparable sales weren’t exactly exemplary before the crisis took hold. Indeed, if we look above at the preceding years, comparable sales spent a lot of time around zero. With nothing about the model having changed, and indeed, I’d suggest the model is now less relevant than it was, building in a rapid recovery in comparable sales is not something I’m willing to do.

There are restaurants that have thrived in this environment; models like pizza and fast food have done quite well because they’re cheap, easy to pick up or have delivered, and the food travels fairly well. Dine’s model is built upon people coming into a store and sitting down to eat, a model that is currently under attack by pandemic conditions. I certainly believe we’ll see the earnest return of in-person dining at some point, but at what capacity, and with what rules remains to be seen. Dine’s model is in the old style of restaurants that doesn’t rely upon digital ordering channels, a takeaway-heavy business mix, etc. In this new reality, there are chains that are much better positioned than Dine, in my view.

The thing is that I don’t believe estimates are necessarily pricing in that reality, as I made clear on my view on revenue.

EPS is supposed to jump higher next year as well, cresting $5 from this year’s ~$2. That’s a big gain on a fairly small relative increase in revenue, and while I believe Dine will be much better off next year, I cannot stress enough that we simply don’t know what 2021 holds for dine-in restaurants. Until further notice, I think Dine’s estimates – along with its dine-in focused peers – will be volatile. There are so many risk factors to this model that I cannot get bullish at the current price.

Speaking of the current price, Dine is trading for 11.4 times next year’s earnings.

In addition, remember that Dine’s formerly juicy dividend is gone until further notice, and that this certainly had a bearing on the valuation. After all, a stock with a 3% or 4% yield is surely more valuable to investors than the same stock with no yield. To my eye, that makes it even less likely that, until the dividend is reinstated at its former levels, the stock should be cheaper than it otherwise would be.

Given that isn’t the case today, I think Dine is priced optimistically here. The risk of missing estimates next year is meaningful given we simply don’t know what course the virus will take. We don’t know when/if restaurants will be able to operate unimpeded, as they did before the crisis. We don’t know if people will want to return to restaurants in the same volumes they did before the crisis. What we do know is that Dine’s model needs all of these things to fall in place to produce a rebound to former levels of earnings, and for that reason, I think Dine should be avoided.