Cleaning services group Rentokil Initial (OTCPK:RTOKY, OTCPK:RKLIF) reported a strong third quarter in a trading update. Despite the positive news, I think the shares remain fully valued and do not currently see a buying opportunity.

One of the things the company has historically done well is identifying business areas which are durable, have steady demand and can provide long-term revenues, albeit may not be high margin. Such an approach comes into its own during a downturn and I think Rentokil has again proven its merits in this regard. Its large contract cleaning services business looks like an attractive business space to be in right now.

That was borne out in the latest results, which showed that in the third quarter, the revenue in the company’s hygiene division showed massive year on year growth of 53.3%. Not only is that huge in itself, it is also much bigger than the already juicy 16.3% year on year growth that division recorded in the second quarter. That suggests that, as lockdowns have eased and companies have adopted to new ways of working, the requirement for cleaning services has increased further. Note that the cleaning part of the segment has actually seen lower demand than normal, with premises such as hotels and restaurants closed. However, there has been a surge in demand for one-off services such as deep cleaning and precautionary disinfection risk assessments.

That is likely to hang around for a few quarters at least, in my opinion, so is a positive development for the company, although the company sounded a note of caution on this, saying that as normal business resumes, the demand for deep cleans (disinfections) will likely fall back. I am more upbeat in my assessment because I think the “stop-start” approach to lockdowns which we are now seeing in many countries may in fact lead to individual institutions ending up commissioning multiple deep cleans over the course of months.

Indeed, the company previously identified three phases to the pandemic in terms of its own business landscape: requirements during the Crisis Phase, the clean-up required in the Recovery Phase, and strategic opportunities in the medium term. Currently, we are at the second stage, at best, so the pandemic should continue to impact positively on the company’s performance in coming quarters.

Notably, performance has been strong in some markets which have had higher incidences of COVID-19, especially the Americas.

However, the Americas are behind the curve in the pandemic, when it comes to mortality rates and reopenings, so I would expect to see this bounce in business there continue for the fourth quarter at least, independently of whether there are further waves.

There are Possible Challenges Ahead

Although the results were positive, especially in hygiene, it is not all smooth sailing for the company. While I expect the ad hoc demand for deep clean and hygiene audits to continue, the longer that hotel, restaurant and catering establishments remain closed in key markets, the more the cleaning business will suffer. There may also be some impact on the pest control division. Indeed, while the company said it hoped to deliver on current market expectations, even it sounded a note of uncertainty in this regard, saying that it was hopeful that the momentum in its core customer base would be sustained across the fourth quarter.

Earlier this month, the company refinanced some existing debt by issuing an eight-year bond raising €600m. While that is good news in itself, as it helped to lower interest costs, perhaps the most interesting thing about the bond issue was that it carried a coupon of only 0.5%. That is the lowest rate at which Rentokil has ever accessed the capital markets, and shows that bond investors maintain a high level of confidence in the company’s long-term risk profile,

With long-term borrowings of £1,059 million reported in its last available balance sheet, however, debt remains high albeit serviceable.

The Company Reiterated a Return to Dividends

Rentokil had said at the time of its interim results that it expected to announce a dividend related to 2020 at the time of its prelim results announcement in February. It again set out this expectation, so in the absence of some large-scale unforeseen business shock, it seems likely that the dividend will be back in February. The way that the announcement was worded gives hope that that will not just be an interim dividend for 2020, it may also offer for example an additional interim in lieu of the lack of a final dividend for 2019.

Rentokil Is not Cheap

The company is performing well during the pandemic and its after-effects. That reflects in part strategic choices such as its business mix and also geographic spread. However, the valuation continues to offer little value, in my view. If the dividend is restored at its previous level – still unconfirmed – the yield would be sub 1% at today’s share price.

Meanwhile, the P/E ratio in the mid-thirties looks hard to justify. While the company has grown revenues handily in recent years, its longer-term record is mixed. That is especially true if one looks at the profit line in the accounts, rather than the profit from ongoing operations only, which tends to give a more flattering growth trajectory. For a P/E in the mid-thirties I would be looking for a compelling growth story, but Rentokil offers a decent but not amazing growth story in revenue terms in what is a fairly low growth category overall. 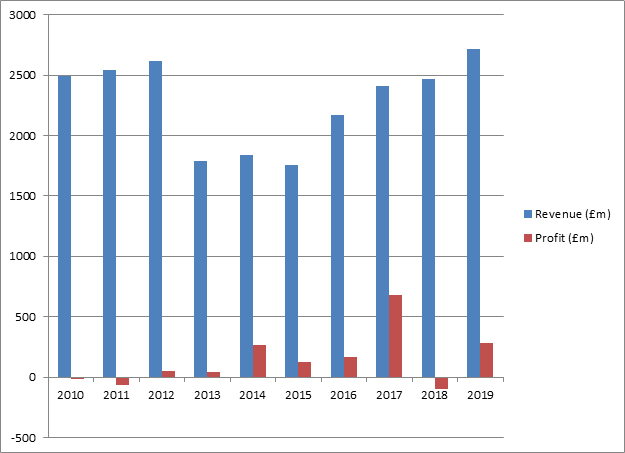 Conclusion: The Pandemic has Boosted Rentokil, it Hasn’t Transformed It

Rentokil continues to perform well as a business and its ongoing strength in the pandemic points to the capabilities of its management team, as well as the underlying smartness in its strategic choices.

However, it trades at an earnings multiple more suited to a growth stock, which is not what it is. At these prices, I continue to avoid.